The Custodian Guard Squad stride into war with confidence wearing bright gold armour. As well as great determination and skill, they have the finest wargear which carries the blessing of their Emperor!

Custodian Guard Squad are members of the Adeptus Custodes and defend the Master of Mankind with breathtaking skill and determination. Armoured in the finest gold wargear they stride into war with confidence and cut down the enemy using their immense strength. They are responsible for the protection of both the Emperor of Mankind and the Imperial Palace, serving as the best bodyguards in the Imperium.

Custodes each have incredible skills and talents to help battle against their opposition.  The Custodian Guard are unstoppable during attack and have individual fighting styles to ensure victory. With the might of the Emperor running through their veins they will cut through their enemies without a second thought. However, as their main job is to guard the Emperor they are rarely seen outside of the world of holy Terra and spend most of their time controlling who enters the palace.

This kit contains the components to assemble 5 Adeptus Custodes Custodian Guard with the choice of one being assembled as a Shield-Captain with a choice of heads and a cloak. One can also be built as a Vexilus Praetors carrying a Custodea Vexilla.

Find the full list of components for Custodian Guard Squad below: 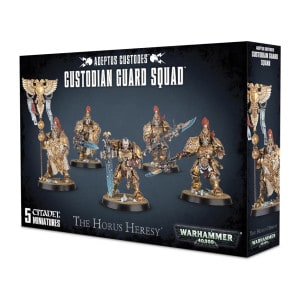 You're viewing: Custodian Guard Squad (Adeptus Custodes) £27.94
Add to basket
We use cookies on our website to give you the most relevant experience by remembering your preferences and repeat visits. By clicking “Accept”, you consent to the use of ALL the cookies.
Cookie settingsACCEPT
Manage consent