The Adeptus Astartes Xiphon Interceptor Squad has been used by Astartes since the Great Crusade. The flexible fighters are able obliterate both air and ground targets with complete ease!

The fast and nimble Xiphon Interceptors have been employed by Space Marines since the Great Crusade. Capable of combating the countless threats that the Imperium faces, the Xiphon are to obliterate both air and ground targets with such ease. This helps to ensure that the enemies of Mankind will never be able to escape the Emperor’s wrath.

Harder than most fighters to take down, they are packing serious firepower such as lascannons and a missile array. There is the option for frag missiles to be traded out for krak missiles which pound ground targets or with the hunter-killer missiles for dogfighting supremacy. A squadron of these amazing aircrafts is more than just a match for most foes and this box supplies you with six to bolster your fleet!

Find the rules for using these miniatures for games of Aeronautica Imperialis in the Wrath of Angels Starter Set. We highly recommend using the Citadel Plastic Glue and Paints to assemble your miniatures and ready them for battle! 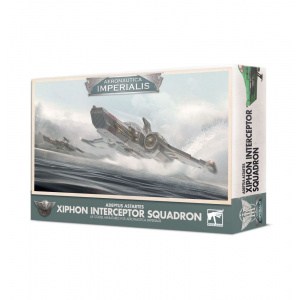 You're viewing: Xiphon Interceptor Squad: Adeptus Astartes £18.20
Add to basket
We use cookies on our website to give you the most relevant experience by remembering your preferences and repeat visits. By clicking “Accept”, you consent to the use of ALL the cookies.
Cookie settingsACCEPT
Manage consent