Take control of factions and reign over the underwater realms by influencing the court. Success is dependent on your choices, so manage your influence and time carefully!

Abyss is a fantasy, aquatic board game where 2-4 players aged 12 years and over will have the chance to gain power and claim the throne. To rule over the Abyssal people players must recruit influential Lords and control underwater locations by collecting allies.

The game of development plays using cards which grant special powers. However, when using these cards to acquire a location all powers will be shut off. Players must develop by collecting allies, recruiting Lords and gaining access to the city to be awarded the throne.

Explore the great depths and gain influential support to increase your influence points and win the game!

Find an overview of how to play Abyss below:

Find the full list of game components for Abyss below:

Be the first to review “Abyss” Cancel reply 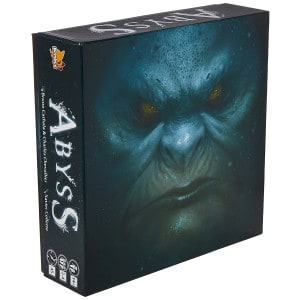 You're viewing: Abyss £36.74
Add to basket
We use cookies on our website to give you the most relevant experience by remembering your preferences and repeat visits. By clicking “Accept”, you consent to the use of ALL the cookies.
Cookie settingsACCEPT
Manage consent