Provide resources, advance your military and develop a civilisation in games of 7 Wonders Duel! Two players will go head-to-head and compete for success with multiple different ways to win.

7 Wonders Duel is a competitive game where 2 players aged 10 years or over will go head-to-head.

This game is played out across 3 rounds and lasts approximately 30 minutes per game. Players will need to have a good plan as there is three different ways to win including advancing the military marker, reaching the opponents capital or requiring six scientific symbols!

This is a stand-alone game designed specifically for 2 players and not an expansion to 7 Wonders.

7 Wonders Duel begins with each player accumulating four wonder cards, and a special ability. This game is for two players only, as only seven wonders are able to be built one player will end up with less.

Resources can be purchased from the bank or players can gain cards throughout the game to provide them with resources. As you claim resources, the cost for them will increase for the opponent.

There is three possible ways to win this competitive game. Players can advance the military marker every time they earn a military card, reach the opponent’s capital or acquire six scientific symbols. If none of this occurs, the player with the highest amount of points wins!

Be the first to review “7 Wonders Duel” Cancel reply 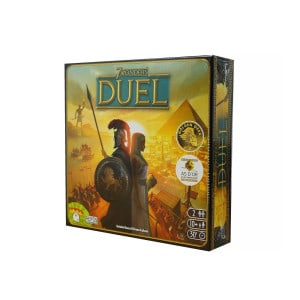 You're viewing: 7 Wonders Duel £16.40
Add to basket
We use cookies on our website to give you the most relevant experience by remembering your preferences and repeat visits. By clicking “Accept”, you consent to the use of ALL the cookies.
Cookie settingsACCEPT
Manage consent